The Retriever Club of Alaska (RCA; Club) was established in the late 1960’s by founder Roy McFall. Roy was instrumental in securing AKC sanctioned trials in Alaska.  We know this from conversations with Roy prior to his passing, and newspaper articles donated by former RCA President, Doug Anderson. Other evidence supporting the history is the Club’s first Open trophy (image below), donated by Roy McFall. The trophy was first awarded in 1966.

RCA’s first retriever field trials were held in Anchorage (Sand Lake area) and in Wasilla (Rainbow Lake) during this time. Reigning field trialers and long time competitors beginning in the Club’s early days were Roy McFall, Jo McFall, Dr. Leonard Ferucci, Jack Woodland, Al Roggow, Harold Zimmerman, Norman Ashley, Jim Brooks, Bob Bain, Dave and Sharon Michaels, Eberhard Bruner, and Beth and Jerry Wade. These folks were the pioneers of RCA, showcasing the sport of retriever field trials across the state. Some competed nationally and internationally throughout their field trial competition careers. Their dedication to the sport resulted in both American and Canadian field champion titled dogs. These titles are hard earned.  It is a true tribute to their competitive spirit to earn such status in the early days of the retriever sport in our state. 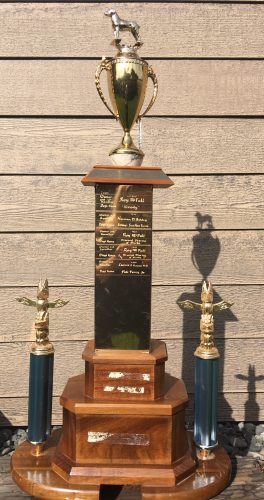 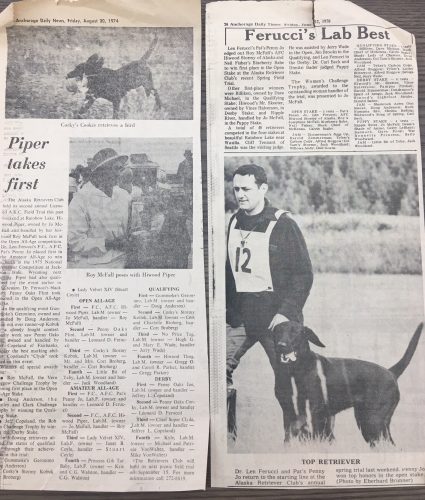 Passion for the sport drives the true competitor.

FUN FACT #1: In 1972, Jo McFall won the Women’s Challenge Trophy for the third time which automatically retired the trophy. Quite a woman!

FUN FACT #2: Also in 1972, Mike Flannery and his black lab NAFC River Oaks Corky traveled to Anchorage, AK for a second time and won a double-header.  This was 6-year old “Corky’s” seventh double-header. Quite a dog!